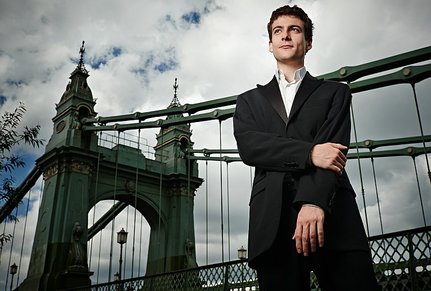 Born in 1991 in London, Alexander studied at the Purcell School and the Curtis Institute of Music in Philadelphia.  “His performance of the Chopin fourth Ballade will live in my mind’s ear for ever: every nuance perfectly judged, poised and placed.  His sound is unique.'’ (Seen and Heard International).
Review:

When Alexander Ullman stepped on to the stage at The Clarendon Muse on Sunday afternoon to give his piano recital, it was as if Frederic Chopin himself was amongst us! Not for him the formal concert dress nor the black grunge favoured by many concert pianists these days - here was the complete young Romantic artist, tall, pale faced, a shock of black hair, with an open-necked white shirt, informal jacket and dark slimfit trousers, the darling of the 19th century Parisian salons to his finger tips and his winkle-picking toes.

All of which seemed so fitting for his choice of programme. But here was no imitation or poseur. Alexander Ullman proved to be the real thing, an artist who was able to convey beauty, power and great sensitivity in giving OMS one of the most compelling concerts for many years. He chose to begin with Haydn's F minor Variations, a ingenious set in alternating major and minor keys, which rise to a climax in a shattering coda which broke through the variation form to provide a bravura ending, and providing a link with the Romantic works to follow.

Alexander followed this with a set of three pieces by Chopin, the Nocturnes Op 27 No 1 in C sharp minor and Op 55 No 1 in F minor, and the Ballade No 4 in F minor (every work he played was in a minor key - that sort of programming used to be frowned upon, but it made perfect sense in his hands). David Rolfe's programme note quoted the wonderful pianist the late John Ogdon who described the Ballade as 'the most exalted, intense and sublimely powerful of all Chopin's compositions' - it certainly gives great scope to a pianist who can embrace the variety of moods through which Chopin leads us.

Alexander Ullman devoted the whole of the second half of his recital to Liszt's Sonata, a work which had no forerunners and few successors. A single movement work lasting half an hour imposes a tremendous burden on the performer; he has to impose his own sense of form on widely contrasting material and, at the same time, be able to move from allegro sections to the slowest without breaking the thread, and also varying his tone colour every few bars. Ullman was equal to the challenge and gave us as convincing and thrilling a performance as we are likely to hear.

Alexander Ullman's strengths were a wonderful technique which allowed him to meet all the demands that the Liszt makes, allied with a convincing sense of shape and of unity. He allowed us to follow the musical logic and to 'see' the musical argument developing - nowhere did he lose sight of the need to communicate with his audience through the music. For example, his closing bars of the Haydn and the Chopin Nocturnes became magical as he allowed the closing notes to slowly fade away into silence, allowing us pause to reflect on what we had heard. Generously, Alexander gave us two encores, another Nocturne and a Study, but he had already set his mark on the day with his masterly playing - little needed to be added after his Lisztian tour de force.
A most remarkable concert, then, from a young man, still in his mid-twenties, who is clearly able to reach the highest ranks of pianists.

Although this was first time the Liszt Sonata has been played at OMS, it was played in Watford Town Hall in the early 1990s by Alfred Brendel who was one of the many distinguished musicians who came at the invitation of the wonderful Mill Hill Toc H Music Club. Strangely, Brendel, too, started his recital with the Haydn F minor Variations.

Sadly, though, two issues prevented this from being an afternoon of unbroken pleasures. The programme had held out the prospect of two short works by Ravel to form a bridge between the Haydn and the Chopin. But after playing the Haydn, he moved straight to the Chopin Nocturnes. Those who knew the Ravel were left wondering what had happened to them, and those who didn't were bemused by the first half seemingly ending with two items still outstanding. Although the programme, including the Ravel, had been agreed with Alexander's agents early last year, at some stage he had decided to slightly abbreviate the programme, perhaps understandably with the Liszt Sonata being included. Unfortunately, this decision was not passed on to OMS. He had played the same, Ravel-less, programme in Milan only last Friday, but was clearly aghast to discover, only at our interval, that the Ravel had still been scheduled for us. It was most unfortunate that our audience was left in uncertainty about this. It was a pity that Alexander was not able to give the audience an explanation, but perhaps he'd got enough on his mind as he approached the Liszt Sonata