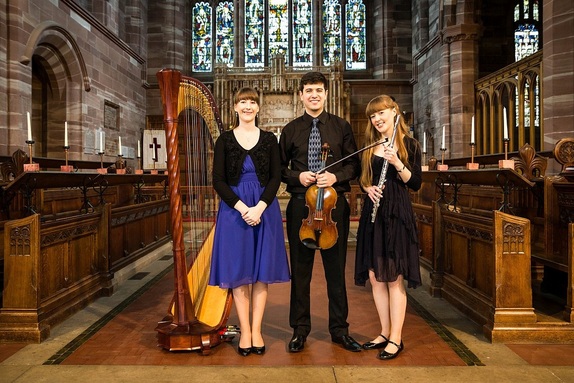 Emma Halnan (flute), Joe Bronstein (viola), Heather Wrighton (harp)
All alumni of the Royal Academy of Music, they are now holders of a RAM Chamber Music Fellowship, and are Concordia Foundation Artists and members of the Live Music Now scheme. Emma whilst at the Purcell School won the woodwind section of the BBC Young Musician of the Year.

The new work by Robert Peate is sponsored by
REVIEW

What a swell party that was! A rainy Sunday afternoon in late winter didn’t seem to be the best timing for a concert by a trio of flute, harp and viola, a combination of instruments which seems redolent of high summer, with the wind ruffling the grass and laughter across the fields. But the Aurora Trio – Emma Halnan (flute) Heather Wrighton (harp) and Joe Bronstein (viola)- had no difficulty in banishing all thoughts of the grey outside world and invited us to join them in a sun-filled celebration of music-making.
The planning of their programme by Joe and his colleagues was an eventual triumph of imagination, persistence and patience: anyone looking at the season’s brochure would have seen no mention of the works by Paul Patterson and Robert Peate – for the good reason that neither had been written when the brochure was published this time last year. Paul Patterson had written his Canonic Lullaby for performance in Germany last year: Emma and Heather were privileged to be asked by Paul to give the UK premiere and OMS was the most fortunate beneficiary of this generosity.
The genesis of Robert Peate’s work was more complicated. Joe had played for Welsh National Opera in performances of Tosca and was intrigued that in Act 2 Puccini had written a short pastiche of an 18th century gavotte, played off stage by a trio of flute, harp and viola. While these soft strains are echoing in the background, onstage Baron Scarpia, the villainous chief of police, is plotting to lure the singer Tosca to visit him after her evening’s performance – in the space of the 25 bars of the gavotte, Scarpia has set out his plans, written a note for Tosca and dispatched his messenger (well, it is an opera). Joe had wondered whether this brief interlude might be the seed of a more extended development of the idea for the same instruments. Cue composer Robert Peate who came on board. Negotiations with the RVW Trust regarding funding consumed several months but eventually the work took shape, not without some second thoughts – ‘Five Takes’ became ‘Seven Takes’ but eventually, as OMS publicity was being prepared, ‘Six Takes on Tosca’. All came together, though, for the work’s premiere in Dublin last week and the composer was able to hear for the first time the public performance of his work at OMS.
It was an additional pleasure that both Paul and Robert were able to come to our concert and to introduce their works – it gave a great sense of occasion to have them both with us for the afternoon. Paul, amazingly, had been in Brighton earlier in the day for a performance of another of his works, and then immediately drove to Watford. (His personalized number plate 205 PP causes him to be known to his friends as ‘Pianissimo’, he says!). Robert’s journey to Watford  was more relaxed but longer, from his home in Herefordshire.
Both these works were challenging for the performers: in the Lullaby, a gentle canon between flute and harp becomes more agitated before calm returns – a beautifully balanced and well-judged performance. The ‘Takes’ in the Tosca trio are six variations, with each finding new ways of restating and recolouring the four opening notes of the original, with a loosely related waltz with quasi-Spanish percussion effects from viola and harp by way of contrast. An ingenious, effective and imaginative work. Both these new pieces are attractive and accessible – yet they demand to be attended to and each leaves an immediate impression on the listener.
And there’s a final ‘Take’ or twist to the tale of Robert Peate’s composition: shortly before his death in 1924, Puccini is alleged to have disclosed to a friend that the Gavotte  was composed, not by him, but by his since-deceased brother, Michele, and was included in the opera as a tribute to him and to ensure his memory lived on!
There are, inevitably, few original works for the Aurora’s combination of instruments. But two undoubted classics are Bax’s Elegiac Trio and Debussy’s Sonata. Neither work is one to engage with intellectually – the appeal here is the sensuous sound of the harp washing through the texture, against the brilliance and precision of the flute and with the warmth of the viola for contrast. And Debussy’s Syrinx is similarly a classic: Emma’s playing was spellbinding, seemingly improvised: time stood still for us.
The arrangement of Beethoven’s Serenade was a curiosity but little more. The arranger had transferred the violin part to the harp, but in whatever form, this work was little more than background music – which is probably what Beethoven had intended.
Tri Chairde by Ian Krouse brought the concert to a rousing end, piccolo leading the way into an Irish reel.
A most unusual and enriching concert then, brought to life by the obvious joy of the performers in their music making. It was so good to see them mixing informally and renewing friendships and acquaintances in the interval and at the end of their concert - their concert had made them many more new friends.