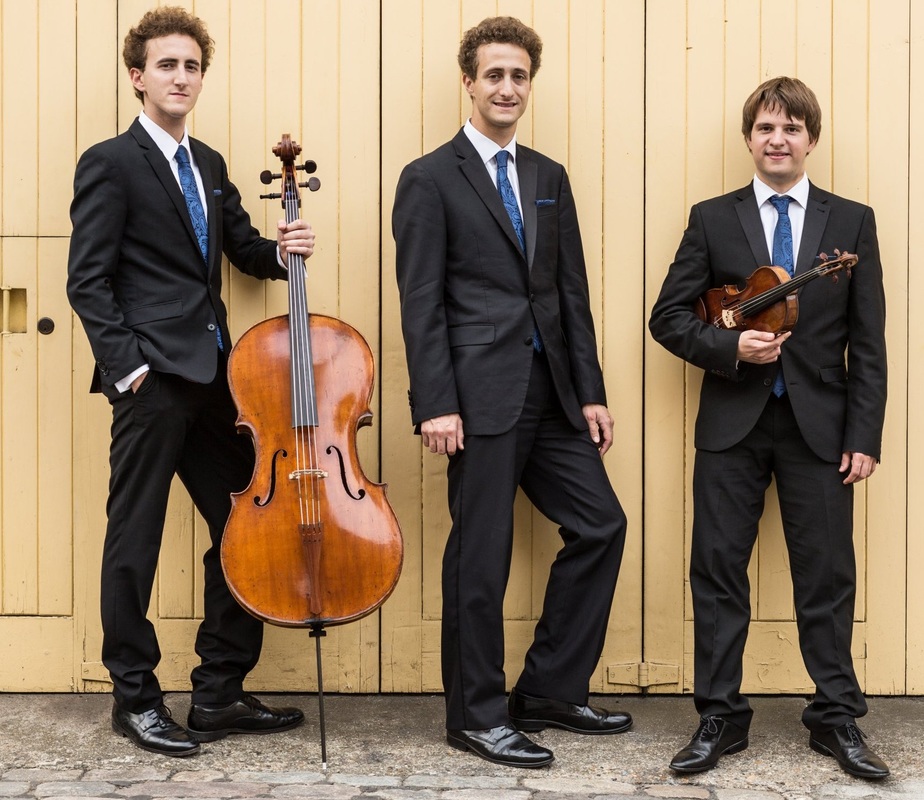 ﻿﻿ ﻿﻿ Matthieu van Bellen (violin), Ori Epstein (cello), Omri Epstein (piano)
Named after the legendary violinist Adolf Busch, this London-based young piano trio has emerged as the leading piano trio among the new generation, receiving enthusiastic responses from audiences and critics across the UK and Europe. "The group already play as though musically joined at the hip." (The Times).
Click to set custom HTML
Review:

​The Busch Trio, violin, cello and piano, were most welcome visitors to OMS at the Clarendon Muse last Sunday afternoon when they played a richly romantic programme including Mendelssohn’s Trio in D minor and Brahms Trio in C major. The Busch had originally been a family trio but when their sister left to pursue a career as an orchestral violinist in Vienna, cellist Ori Epstein and pianist Omri were joined by violinist Matthieu van Bellen. But if no longer joined by blood, they certainly all now share a remarkable musical vision and personal rapport.

The concert started with an OMS premiere, the Dutch composer Theo Loevendie’s Ackermusik (1997). Loevendie’s background is in jazz, but this work came to the attention of the Busch when Loevendie recently passed it to his fellow-countryman Matthieu van Bellen. The Trio has now given a number of performances in recent months. The two string players have similar material which is characterised by uncertainties of pitch and which is set against increasingly dramatic flourishes on the piano. Moving from a slow start, it picks up speed and intensity before resolving to a calm conclusion. An evocative soundscape has emerged and then dissolved.

It can be fascinating, and informative, to see how critical opinion about music can change over a short time. Mendelssohn’s music has particularly suffered from the prejudices of critics. Here is Andrew Porter, a much admired music critic of the Observer and the New Yorker, Editor of The Musical Times, writing in the 1950s about Mendelssohn’s D minor Trio: ‘On paper…it seems vapid. What was deft in the Octet has become glib; what was romantic has turned sentimental. Invention sparks freely, but at a low voltage.’ And more: ‘facile tricks’, ‘lurching harmony’, ‘fails to raise a smile today’, ‘banal material’, the Scherzo ‘skitters away quite attractively’, the finale ‘collapses hopelessly on the tonic’, ‘Mendelssohn uses two deflatory phrases with deplorable readiness.’ To be fair, Porter does say ‘A team such as Cortot, Thibaud, and Casals could achieve elegance by way of a gentle approach, and they made the music sound worthwhile’. But what OMS heard on Sunday was a joyful and uplifting performance of a supremely crafted and varied work; the Busch brought passion and love where Porter had seen only surface sentiment. This was young men playing with shared intensity and involvement. The members of the Trio are all roughly the same age as Mendelssohn was when he wrote the work – but so also was Andrew Porter!

The Op. 87 Piano Trio is the only mature extended work by Brahms in the key of C major. Whether the choice of key dictates the shape and nature of the music, or vice versa, is another intriguing puzzle. But this work is full of the straightforward sonorities and textures which are associated with this key – throw the Hungarian tinge into the goulash, and you have another work of immediate appeal. And although the style of the music is altogether richer and more complex than the Mendelssohn, it can’t be a coincidence that the Busch chose to link these works in their programme; the opening movements of both are marked ‘allegro’, the slow movements are both ‘andante con moto’, the scherzi are ‘leggiero e vivace’ in Mendelssohn, ‘presto e leggiero’ in Brahms, and both finales are marked ‘allegro giocoso’ (joyful). So the outward similarities are clear, yet the Brahms is obviously the more substantial work. To it, the Busch brought a greater depth of feeling and refinement – they transmitted to us a shared joy and radiance. They had given us an immensely satisfying afternoon of the finest chamber music.
That this was so evident may have sprung in part from the Trio’s decision to position themselves even closer to their audience than the usual concert hall dictates. When it was pointed out to them that they would be sitting on the laps of the front row, they said ‘Will they mind?’  But the Muse brings everyone into the closest communion with the music and the musicians. And then they played an encore, a movement from Dvorak’s Dumky Trio.

Matthieu van Bellen introduced the programme and very moving it was to hear of the circumstances in which he comes to play on a Guadagnini violin which had previously been owned by the German violinist Adolf Busch, from whom the Trio take their name. A famed and revered virtuoso of the middle years of last century, although not Jewish he exiled himself from Germany in 1933 as a matter of principle within weeks of Hitler coming to power. A few years later, given an assurance that he could return safely to Germany with pianist Rudolf Serkin, he refused to relent. He died an exile in America in 1952. Along with Stradivarius and Guaneri, Guadagninis are the finest of violins which are lovingly sought by the world’s finest players. The world record price for a Guadagnini is $1.39 million in 2013 – however a Guadagnini was sold at Broughtons in London last March for £576,000. It is a very moving experience to listen on YouTube to Adolf Busch playing the Bach unaccompanied Third Sonata on the same instrument that we were privileged to hear on Sunday. By strange coincidence, we shall have opportunity to hear two other Guadagninis next season – both Tasmin Little and Siri Simonen, leader of the Castalian Quartet play on a Guadagnini. Compare and contrast.