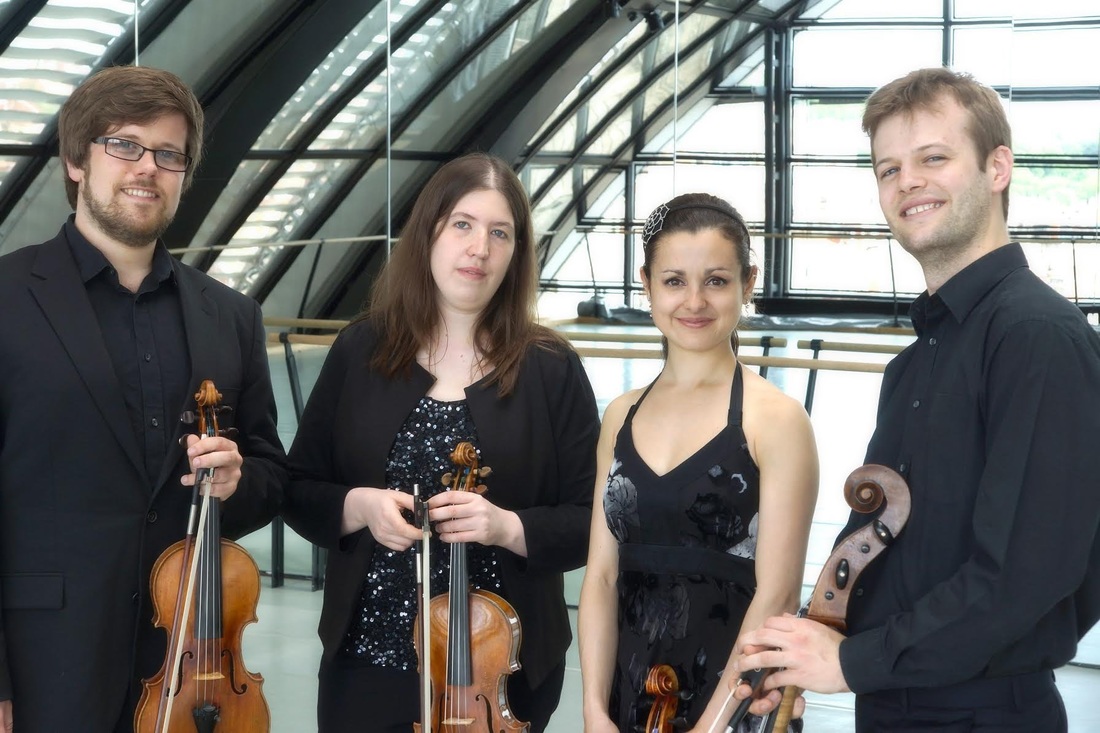 Sini Simonen (violin) Daniel Roberts (violin)
Charlotte Bonneton (viola) Christopher Graves (cello)
Since their impressive concert for us in 2012, the Quartet has scaled fresh heights, leading to First Prize in the 2015 Lyon International Chamber Music Competition. They have gone on to study with an array of distinguished musicians, and been praised for their ‘richly romantic energy and passion’ (The Strad).

Octagon Music Society’s first concert of the season brought a return of Castalian String Quartet four years after their first visit: their members are now violinists Sini Simonen and Daniel Roberts, violist Charlotte Bonneton and cellist Christopher Graves who are now blended into an ensemble which has taken prizes at the 2015 Lyon Chamber Music Competition (first prize) and, only six weeks ago, at the Banff International String Quartet Competition in Canada. Their concert for OMS was their first since their return from Banff, so there was a considerable air of expectation amongst our audience (and perhaps the quartet themselves); added to this was a frisson concerning the choice of music they were to play.
They began conventionally enough with Haydn’s late quartet, Op 76 No 1 in G major and gave a performance full of joy – joy in the music, joy in the playing and, surely, joy in the soul of the listener. The Quartet are to play all six of Haydn’s Op 76 quartets in the coming months but their exquisite observance of every detail in the music showed they already have this music firmly in their grasp. But their close familiarity with the music did not exclude spontaneous moments of humour, as in the Trio of the (fast) minuet, where the joke was apparent not only in the music, but on the faces of the players. Wonderful music making indeed.
Programme planning for a small music society is a matter which much concerns both the audience and the committee, particularly when the practicalities now dictate that there can only be one string quartet concert in a season. So it was a bold/rash, inspired/disappointing decision to devote the remainder of the concert to two works which are far from the musical mainstream. Bartok’s Sixth Quartet may be an established classic but is still a tough nut for the average music lover, whilst Thomas Ades ‘The Four Quarters’, already hailed as a modern masterpiece, is far from easy listening. Yet paired in OMS programme, sensibly separated by the interval, they both made distinct and involving impressions on the listener.
Appreciation of the Ades work is either aided or hindered by it having a name, as do the four short movements: ‘Nightfalls’, ‘Serenade: Morning Dew’, ‘Days’ and ‘The Twenty Fifth Hour’. Ades has a puckish sense of humour but once you know the title, it is difficult not to wonder how the unfolding music relates to the name – ‘not much’ might be a reasonable answer; anyone listening to ‘Serenade:Morning Dew’ and hoping to hear a reprise of Delius’ Song Before Sunrise or Elgar’s Chanson de Matin would be sadly confused. Eugene Drucker, violinist in the Emerson Quartet which gave the work’s first performances in 2011 and worked with the composer in its preparation came to regard the titles as, at best, ‘merely suggestive but only in the broadest sense’. So that’s some comfort. Each movement is simply constructed, with repeated patterns and intervals, clear climaxes, no development, no emotional content – not easy to absorb but easy to follow as it unfolds. The final movement is bizarrely balletic, with what seems to be a foot-tappable rhythm: in fact the time signature is 25/16, divided into 2/4+3/16 and 2/4+6/16 in each bar – try dancing to that. Eugene Drucker says ‘ultimately we found a quasi-intuitive way of keeping together’, an achievement which chamber musicians at all levels can take comfort in seeking to emulate. For all this it is certainly striking (no pun intended) and fascinating music, which the Castalian delivered with complete assurance and, above all, clarity.
Bartok’s Sixth Quartet is about as far distant from the musical world of the Ades as can be imagined. An air of melancholy and regret pervades the work. Bartok, a Hungarian, completed the work in November 1939; his mother died in Budapest in December and Bartok reproached himself that, in starting work on the quartet in Switzerland in August, he had neglected to give his mother the care and comfort she needed. Add to that his concern for his homeland and his own future (he emigrated to USA in October 1940) it is not surprising that a strain of sadness and regret characterises the music. In performance, it became an intensely moving expression of emotional distress; depressing to some, searingly direct to others.
In all three performances, OMS had the privilege of hearing music prepared to the highest level of music making. All these works had been played at Banff on the Quartet’s progress through five rounds of competition. But now the element of competition was absent and we heard a new ingredient – simple music making for love of music and a desire to communicate to other music lovers. We were fortunate indeed.
You can catch a taste of the Castalian’s Banff performance on the Banff International String Quartet 2016 website where, in the AdLib round, they played three of the Four Quarters, interspersed with movements from Brahms and Schumann quartets.