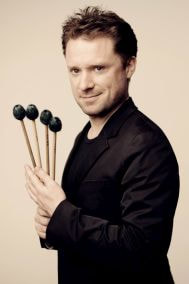 COLIN CURRIE (percussion)
Sunday 20 October 2019 at 4.00pm
​‘The world’s finest and most daring percussionist’ (The Spectator). Colin Currie has established a unique reputation as a charismatic advocate and populariser of contemporary percussion music. He will introduce and perform some of the outstanding works by leading composers in this field. ‘Technically impeccable and musically overwhelming’ (The Guardian).
​​Winner of the Shell/LSO Competition Gold Medal in 1992, the first percussionist to reach the BBC Young Musician finals in 1994, he has gone on to carve out a unique place as an innovator, instigator and educator in the world of percussion. He has been responsible for commissioning many new works; he has performed more than thirty premieres of works for percussion and orchestra. He has launched his own record label to promote new music. In 2006 he founded the Colin Currie Group to extend his exploration of ensemble repertoire. On radio and TV he has been an entertaining and amusing enthusiast for his music.
This solo recital will see a huge battery of instruments in The Muse, including a 5 octave marimba, vibraphone, 5 tom toms, 2 pairs of bongos, pedal bass drum, large gong / tam tam, bass drum, conga drum, and low tam tam. It should be a sight and a sound to be remembered.
REVIEW

‘This isle is full of noises, sounds and sweet airs, That give delight and hurt not. Sometimes a thousand twangling instruments Will hum about mine ears….’ For a hundred minutes on Sunday afternoon the Clarendon Muse took on the character of Prospero’s island and gave OMS a concert the memory of which the appreciative audience will treasure.
​
Colin Currie is, at the age of 42, a unique musician. He has, by his willingness to take on every challenge, made himself the percussionist for whom every composer wants to write. His diary shows a succession of first performances around the globe. The weekend before our concert he was in Oregon, USA, for three concerts of new music. On Monday following our concert, he was straight in to rehearsal with Britten Sinfonia for concerts, two performances in one evening (Wednesday), with his great friend Steve Reich, a multi-media cinematic exploration of abstract painting at London’s Barbican. And he was also making his conducting debut there!
But he loves the intimacy of a solo recital so he can connect more closely with a smaller audience. So when we asked him to play for us, he jumped at the chance on Sunday. This was his only solo recital date this season (eat your heart out, London) and he had constructed a programme which formed a wonderful introduction to the many joys of contemporary percussion music.
All the instruments were hired by OMS for the day. It helped that they were provided by one of Colin’s colleagues from the Colin Currie Quartet. But we watched them being unloaded from the van until it seemed even the large Muse stage was too small. When the concert began, though, it was clear that the placing of the instruments was crucial, down to the millimetre.

The first half of the concert was an unbroken chain of sounds, everything from marimba, vibraphone, drums of all types; it showed the full range of percussion in all its many colours. The second half brought Stockhausen in reflective and approachable mood, and finally the zany Realismos Magicos of Rolf Wallin. As he often is, Colin was actively workshopping that work with the composer so that composition and improvisation become  seamlessly linked.
What was apparent to us, by the end, was how the ear can become more sensitive to tiny adjustments in the sound world, for example, as the type of beaters was varied in the course of a few seconds. But the sound which we shall all remember was the sonorous gong: you could sense the overtones before the shattering sound hit the ear! Wonderful. As was the whole afternoon. Colin was full of praise for The Muse as a performance space, both for size, sound, and visibility. That we could all see the visual delights of performance, and his contortions as he adjusted the beaters to the demands of the composer was a fascinating insight which only close proximity allowed.​