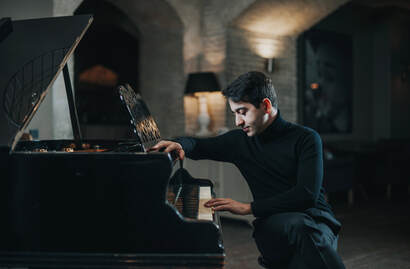 Luka Okros was born in 1991 in Tbilisi, Georgia. He made his national debut at the age of 5, before studying at the Tchaikovsky Conservatory in Moscow and later at Royal College of Music in London. On graduating, he won the Jaques Samuel Intercollegiate Piano Competition in 2014. His competition successes include the Hong Kong International Piano Competition in 2016 and the Hannover Chopin Competition in 2017. He made his USA debut at Carnegie Hall at the age of 18, and by the age of 25 he had performed in over 25 countries. In the last year, he has given solo recitals in Oslo, Vienna, Brussels, Helsinki, Budapest, Tbilisi, Kiev, Berlin, Luxembourg, Amsterdam, Montevideo, culminating in a sell-out concert on London’s Southbank in July 2019. His more local successes include an enthusiastically received recital at Little Missenden Festival in October 2018.
In addition to his career as a performer, he also works on creating an album of his own compositions.

Luka Okros - Sunday 19 January 2020 - review by Dr Jonathan Tyack
​
Emotions were never far from the surface of this recital, and not only because of the lush romantic repertory. It was especially poignant because of the absence of Anthony Bramley-Harker, who passed away last month. Anthony, as Artists’ Secretary, had programmed this concert, and doubtless he would have followed it up with a review. This is written in his memory.

“Memories; winter wind; great loss; pure passion; love; victory.” With these words the softly-spoken Luka Okros introduced Rachmaninov’s Six Moments Musicaux Op.16, by way of a personal gloss on each movement. Each listener will have felt their own “great loss” during the third, but the loss of Anthony surely resonated particularly for Octagon Music Society. Head bowed during this movement, Okros focussed in on the music’s sweet dissonances and their bitter resolutions.

Loss was inescapably prominent again in the ‘Funeral March’ from Chopin’s Sonata No.2 in B flat minor Op.35. Okros showed - perhaps unexpectedly - an interior quality to this music, again playing stooped low over the keys as if to draw his listeners closer to his relentlessly taut lines.

Okros is not only a pianist who can draw an audience along on the arc of a beautiful line, but who can also inject drama through rupture. In the opening movement of the Chopin Sonata his left hand punctured the serenity of high pitched chords, as if with intrusive negative thoughts. In Liszt’s Hungarian Rhapsody No.2 he frequently brought out destabilizing accents and rhythms, thereby refreshing a well-known classic.

Here was a pianist whose musical intensity was belied by his gentle demeanour. At the end of each piece he took his richly deserved applause in a businesslike manner, as if impatient to get on to the next. As an encore, Okros played an exquisite composition of his own; perhaps he might have called it “hope.” And it is with hope and impatience we look forward to the next Octagon concert, and to many more in the future. As Anthea mentioned, to make that happen help is needed - do please get in touch if you can contribute in any capacity.