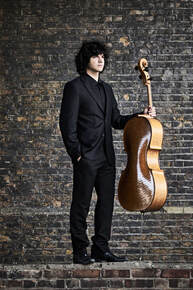 JAMAL ALIYEV (cello)
Maksim Stsura (piano)
Sunday 17 November 2019 at 4.00pm
Jamal Aliyev made his solo BBC Proms debut in 2017 playing the music of John Williams. Highlights of the last season include solo performances with Philharmonia Orchestra at Royal Festival Hall, with Symphony Orchestra Simon Bolivar of Venezuela, and at Birmingham’s Symphony Hall. He premiered a new work by Karl Jenkins at Istanbul Music Festival and has recorded with Classic FM and Champs Hill Records.
Born in Baku, Azerbaijan, Jamal studied at the Yehudi Menuhin School and Royal College of Music. He is currently a Young Concert Artists Selected Artist.​

After the high octane, high decibel, and all-action of Colin Currie's unforgettable concert last month, OMS returned to more familiar fare at last Sunday afternoon's concert. Not that cello and piano yield in any way to brash percussion, but this concert was (as it turned out) firmly placed in the classical tradition and gave us an afternoon of renewed acquaintance with much-loved music as well as a sprinkling of the less familiar.
Jamal Aliyev and Maksim Stsura, respectively Ajerbaijani and Estonian, had both, a few year's ago, followed the same path from their native countries to pursue higher studies at London's Royal College of Music. They had not collaborated in music making at RCM, but both decided to make London their career base. Jamal came to OMS notice whilst still a student when he gave a superb performance of Dvorak's Cello Concerto with the RCM Orchestra, and we followed his progress as his career swiftly developed. He was chosen as a Young Concert Artist's Trust Selected Artist in 2017 and, in New York in 2019, by the Concert Artist's Guild. So he is now truly launched on a stellar career. And a busy one it is; on the day before our concert he and Maksim played the same programme in Leighton Buzzard, and on the previous day in Cranleigh! Concerts worldwide follow.
Members may have noticed that originally the concert was advertised with a different pianist: Maria Tarasewicz withdrew at fairly late notice for the best possible reason, imminent childbirth, so Jamal and Maksim came together with the dynamic and entirely satisfying results we heard. There was another late change, of course; the running order of the programme was comprehensively revised. Programme planning is a craft to which artists and concert organisers devote much time and consideration - balance, variety, familiarity all come into question. To begin the concert with the biggest and weightiest work (the Brahms F Major Sonata) seemed likely to create a potential later sense of anticlimax. But in the event, it never felt like that. Perhaps it was that the shorter pieces gave Jamal and Maksim more opportunity to talk to us (and themselves) and to project their personalities. Whatever, Jamal's burnished cello tone glowed in the Rachmaninov Vocalise, the two lollipops by Popper were huge fun, and the Tchaikovsky Pezzo Capriccioso was in turn suitably sad and demanding. Maksim proved a real partner to Jamal throughout. Jamal's travel arrangements meant that Maksim had an hour before the concert in which to play through the Brahms alone - hearing that through closed doors, the performance itself underlined the sensitivity and sense of sharing which Maksim brought to the finished article. The encore, wistful and sad, was Sicilienne by Maria Theresia Paradies, (although Grove says it might be spurious!) a perfect end to a memorable afternoon. It was that sort of day.